AW History holds seminars, webinars, workshops and other events related to medieval history. Details will be posted on this page about forthcoming events.

The Siege of Caerlaverock 1300

The Castle at Caerlaverock

In the summer of 1300, King Edward I of England invaded Scotland at the head of an army of 3,000 men including 87 knights and taking with them the latest siege weapons. Their first objective was to take the castle at Caerlaverock on the Solway coast of Dumfriesshire that was defended by no more than 75 men led by the constable, Walter Benechafe.

However, as was reported in the 'Roll of Caerlaverock' - a chronicle written by an English herald - "Mighty was Caerlaverock Castle. Siege it feared not".

Find out what happened at the siege of Caerlaverock and why at our next webinar.

The webinar will be held on Monday 30th May 2022, starting at 7pm, and will last about an hour. The presenter will be Adrian Waite. There is no charge for attending the webinar.

To register to join the webinar, please click here.

Andrew Harclay and the Battle of Boroughbridge 1322

The River Ure at Boroughbridge

The Battle of Boroughbridge was fought in Yorkshire on 16th March 1322. Andrew Harclay, a knight from Kirkby Stephen in Cumbria, who was loyal to King Edward II, defeated a rebel army led by Thomas, Earl of Lancaster and Humphry de Bohun, Earl of Hereford. After the battle, Thomas of Lancaster was beheaded and Andrew Harclay was created Earl of Carlisle. However. Harclay's triumph didn't last long and neither did Edward's reign. In 1323 Edward II had Harclay executed. Then, in 1327, Edward II himself was deposed and murdered.

So who was Andrew Harclay? Why and how did he find himself fighting a battle in Yorkshire? And why did the King whose throne he had saved have him executed a year later?

The webinar was held on Wednesday 16th March 2022 (the 700th anniversary of the battle) and lasted for about an hour. The presenter was Adrian Waite. There is no charge for viewing the recording of the webinar.

Henry V and the Battle of Agincourt

Medieval Depiction of the Battle of Agincourt

Henry V is often seen as one of England's greatest medieval Kings and his victory at Agincourt is often seen as his greatest triumph. This webinar covered Henry's campaigns in France including Harfleur and Agincourt, and considered both the legends and the facts including the role of the archers.

The webinar was held on Wednesday 26th January 2022 and lasted for about an hour. The presenter was Adrian Waite. There is no charge for viewing the recording of the webinar.

Why the Dark Ages should be renamed the Golden Age 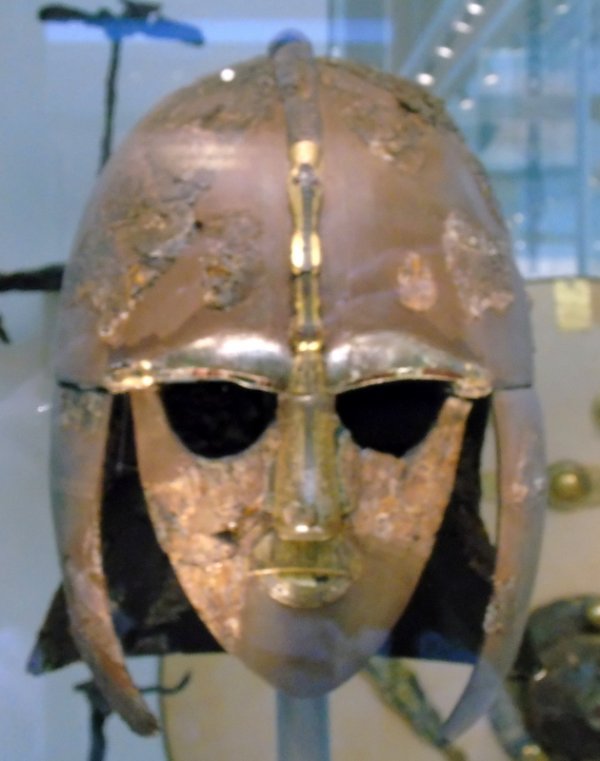 The period between the fifth and eleventh centuries in Britain is often called the Dark Ages. This webinar will demonstrate that it was really a Golden Age that surpassed both the Roman period that preceded it and the Norman period that followed.

The webinar was held on Tuesday 31st August 2021 and lasts for about an hour. The presenter is Adrian Waite. There is no charge for viewing the recording. 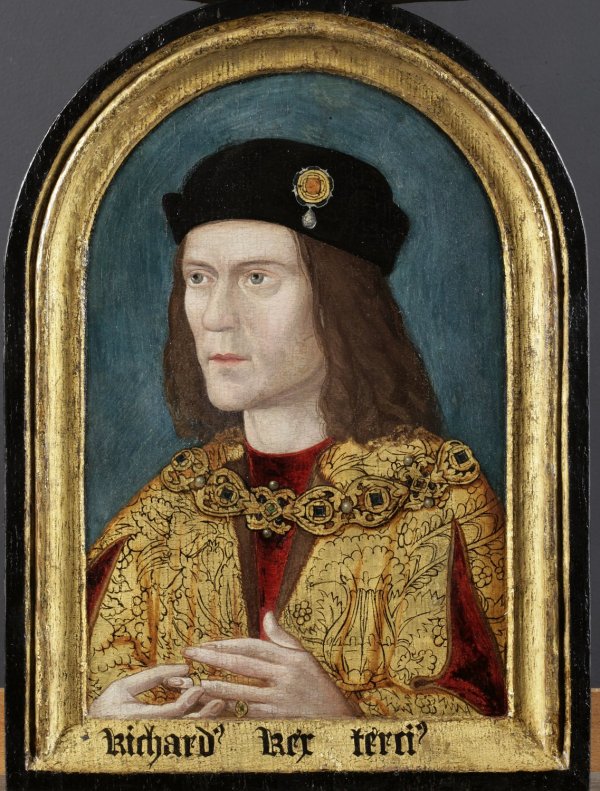 Richard III is one of England's most controversial monarchs. Shakespeare depicted him as a villain while others see him as a hero. This webinar was held on 27th May 2021 and tried to identify the real Richard III in the context of the fifteenth century. It was presented by Adrian Waite who considers that Richard was chivalrous, pious and a traditionalist and that this was probably what caused his downfall. The webinar lasted about an hour.

The Battle of Towton was the bloodiest ever fought on British soil. Fought on Palm Sunday 29th March 1461 in a snow storm it left 28,000 dead and brought the reign of King Henry VI to an end. This webinar was held on the anniversary of the battle. It considered the causes and the course of the battle and challenged some of the traditional assumptions. It was presented by Adrian Waite and lasted about an hour.

Arms and Armour in the Medieval Period

We held a webinar on 'Arms and Armour in the Medieval Period' on Monday 25th January 2021. The webinar described the arms and armour that were used in the medieval period, from the seventh century onward but focusing on the fourteenth and fifteenth centuries. It covered swords, polearms, crossbows, long bows, siege engines, helmets, chainmail, plate armour and much more. The presenter was Adrian Waite. The webinar lasted about an hour. There were opportunities to ask questions and make comments.

Northumberland during the Medieval Period

We held a webinar 'Northumberland during the Medieval Period' at 7pm on Wednesday 26th November 2020. It outlined the history of Northumberland, England's northernmost county, from the fifth century to the sixteenth and described some of the events, surviving artefacts and sites including Lindisfarne Priory; the Viking raids; castles including Bamburgh, Dunstanburgh & Warkworth; the border wars and the medieval sites of Newcastle on Tyne. The presenter was Adrian Waite. The webinar lasted about an hour. There were opportunities to ask questions and make comments.

To view a recording of the webinar, please click here

Gotland during the Medieval Period

The Medieval Walls of Visby

We held a webinar 'Gotland during the Medieval Period' at 7pm on Wednesday 23rd September 2020. It outlined the history of Gotland, a large island in the Baltic, from the fifth century to the sixteenth and described some of the surviving artefacts and sites including the Gotlandic Picture Stones, the Boat Burials, the Walls of Visby, the Battle of Visby and the numerous medieval churches in Visby and around the island. The presenter was Adrian Waite. The webinar lasted about an hour.

"Thank you very much for letting us attend your webinar. We found it extremely interesting."

"Thanks for the presentation... I missed it live as it was on at 4am here in Australia and I slept through my alarm. Have just watched it and enjoyed it very much."

"I went to Sweden in December last year but did not get to Gotland. Will definately go there when we are able to travel again."

"When researching climate... I discovered there was... a cold snap and some very wet years starting in 1315... This must have had some effect on... Visby's commercial activities. Perhaps its very success... made it a soft target for more agressive groups unleashed... by a climatically driven breakdown in social order."

"The other week we watched a repeat of the Vikings series with Neil Oliver. In the first episode he spends a lot of time in Gotland, which wouldn't have meant anything the first time we watched it. We have your talk to thank for our additional knowledge."

The Eden Valley during the Medieval Period

We held a webinar 'The Eden Valley during the Medieval Period' at 7pm on Wednesday 15th July 2020. It outlined the history of the Eden Valley from the fifth century to the fifteenth and described some of the surviving sites including Appleby, Brough, Brougham, Carlisle, Kirkby Stephen, Pendragon and Penrith. The presenter was Adrian Waite. The webinar lasted about an hour.

"Great talks, Adrian! I would love to hear about any other such events."

"TYVM Adrian, keep it up, cheers!"

"Thank you for your fascinating talk on the Eden valley. As I live in Australia it was too early for me to watch it live but I have just watched it and enjoyed it very much."

"I have just watched your 'Eden Valley during the Medieval Period' Excellent, thank you."

"It was most interesting, thank you."

"Thanks for the replay. Picked up a few more points I'd missed the first time round. And thank you again for your original presentation."

We held a webinar on: "The Clifford Household during the Wars of the Roses 1450-87" at 7pm on Tuesday 12th May 2020. This webinar lasted about an hour and covered the history of the Clifford family from 1455 to 1487 and their involvement in the Wars of the Roses. First, Lord Thomas Clifford, a veteran of the wars in France who was murdered at the first Battle of St Albans in 1455. Second, Lord John Clifford, who became Lord at the age of twenty, avenged his father but was killed in an ambush in Dintingdale on the eve of the Battle of Towton. Third, Lord Henry Clifford, often called the 'Shepherd Lord' because as a child he had been a fugitive in the home of a shepherd, but who was restored to his estates in 1485 following the Battle of Bosworth. This webinar drew on various sources to explain their lives and times and there were opportunities to ask questions and make comments. It was attended by people from places including Britain, Ireland, the United States and Australia.

"Was good to hear you yesterday during your talk. Seems I learn something new about the Cliffords each time."

"Thanks Adrian. I enjoyed it and learnt a few things about the Lancastrians. I'm a Yorkist and Ricardian myself!"

"Just to say that I enjoyed your webinar yesterday evening."

Other events which you may be interested in include: 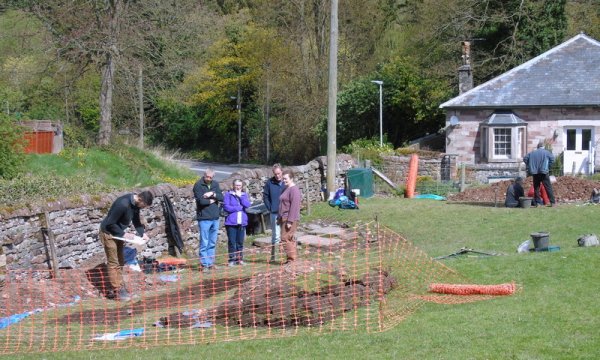 An excavation at Castle Bank, Appleby.

Appleby Archaeology is a local archaeological society that holds meetings in the Appleby Market Hall. Adrian Waite is one of their committee members.

Their next meeting will be held in Appleby on 14th April 2022 and is on 'The Viking period Longhouse at Bryant's Gill at Kentmere, Cumbria, and the origins and nature of longhouses in Cumbria'. The speaker will be Steve Dickinson. For further information, please click here.

The Battlefields Trust is dedicated to the protection, promotion and interpretation of Britain's battlefields. I am a member. The Trust has a resource centre on British battlefields on its website and also a programme of battlefield walks and other events across the country.

For information on the work of the Trust and full details of walks and events, visit their website at: http://www.battlefieldstrust.com

The Red Wyvern Society is a fifteenth century re-enactment society that depicts as many aspects of life in that period as possible including arms and armour, archery, siege warfare, cooking and crafts.

The Towton Battlefield Society organises various events including a commemoration of the Battle of Towton each year on Palm Sunday, the anniversary of the Battle. 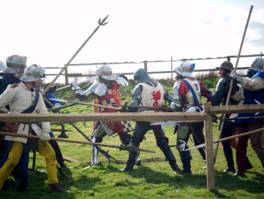 Looking for a Historical Presentation?

Adrian Waite is also prepared to make presentations to Historical Societies, Museums, Colleges and others for an appropriate fee. For more information please contact Adrian.

If you appreciate and value AW-History events and would like to make a donation, please click here.